Good for an arty get-together or a saucy rendez-vous.

A curious mix of intellectual enclave and red-light district, the Barrio Lastarria has developed over the years an idiosyncrasy of its own. It’s indisputably open-minded, with swanky shops and bookstores rubbing shoulders with sex shops and cabarets. Its residents display their tolerance and cosmopolitanism with pride, though they also share a strong commitment to keeping the Lastarria a genuine and very traditional barrio. 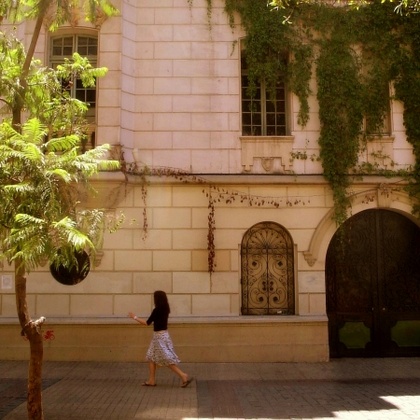 Tucked between the Cerro Santa Lucía, a former Spanish stronghold turned public park and the riverside promenade that is the Parque Forestal, the Lastarria’s location has pre-existing good looks. The place is also proud of its belle époque landmarks: elegant streets, lively café society, and the sensational Museo de Bellas Artes. On weekend afternoons, the area bubbles up with painters, jugglers and buskers, creating a suave cultural vibe.

Starting from the Plaza Italia, dive into the cosy Parque Forestal, with its gravel paths and iconic lamp posts. In addition to its classic romanticism, this stripe of green boasts some beautiful monuments like the Fuente Alemana, a large water fountain in bronze and stone built in memory of German migrants to the country. Along the park’s southern edge are some fabulous art deco buildings, many of which are the output of the talented architect Luciano Kulczewski. Not all of them are Art Deco samples though: the Palacio Bruna is a notable exception with its beautiful Tuscan Villa appearance. Today it is the home to the Chilean Chamber of Commerce, but unfortunately, cannot be visited.

As you reach the corner of Calle Merced and Calle Monjitas you’ll find the legendary Emporio la Rosa, a popular deli offering al fresco lunches and some of the best ice cream in Santiago. Heading down Calle Merced, you reach Calle José Victorino Lastarria, the narrow pedestrian street from which the quarter borrows its name. On Sundays, this end of the Calle Lastarria becomes the epicentre of the district’s bouillabaisse, when a flea market takes over. However, the main crowd-puller in the area remains the Plaza Mulato Gil de Castro, redeveloped in recent years to provide room for no less than two new museums, the Museo Arqueológico de Santiago and the Museo de Artes Visuales. The first of these has built on the success of the central Museo de Arte Precolombino and holds exhibits of diverse archaeological interests, placing a particular emphasis on Chilean ancient cultures. From its part, the Museo de Artes Visuales boasts a collection of Chilean contemporary artists, as well as regular exhibitions.

Nothing, however, surpasses the Grand Dame of Chilean cultural landmarks, the Museo de Bellas Artes. On its location at the heart of the Parque Forestal, this curvaceous 19th century building was conceived by Emile Jecquier, the architect behind the Estación Mapocho sited further along the riverbank. Whilst the Museum as an institution has existed in Chile since 1880 (making it the oldest in Latin America) the initiative by President Aníbal Pinto in 1906 to commission a purpose-built building for exhibits and an academy of Fine Arts marked a turning point in the history of the country’s arts.

‘Just as popular as the museum is its forecourt, much loved by families who gather on lazy weekend afternoons to witness street performances.’

At the building’s doorstep stands the sculpture of ‘Icarus and Dedalus’ by local talent Rebeca Matte, a pioneer among Chilean women artists of the 19th century. On the inside, it is the spacious hall that attracts all the attention, with its impressive Art Nouveau glass roof. As the nation ’s foremost museum, the painting collection is a compelling journey through Chile’s five centuries of Fine Arts, featuring some local masterpieces such as “El niño enfermo” by Pedro Lira, “La viajera” by Camilo Mori or “Tentación de San Antonio” by Claudio Bravo. The permanent sculpture exhibit in the main hall is also noteworthy and features works by some of the most renowned Chilean artists in this discipline, including Rebecca Matte, Virginio Arias and Marta Colvin. The Museum also offers a solid annual calendar of exhibitions. 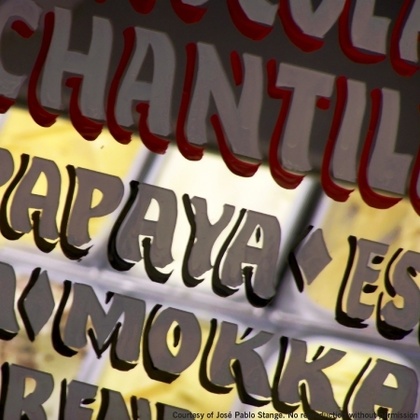 Standing back to back with the Museum is the Academia de Bellas Artes, where many renowned local artists attended. This palace now houses the Museo de Arte Contemporáneo, which underwent a massive refurbishment in 2005. Since then, the “MAC” has become an increasingly popular art space, boasting a packed calendar of exhibitions and events. The museum also has a substantial holding of modern art, featuring some of the best of the domestic scene, such as Nemesio Antúnez and Roberto Matta as well as foreign artists such as Hundertwasser.  Just as popular as the museum is its forecourt, much loved by families who gather on lazy weekend afternoons to witness street performances. The elegant streets surrounding the forecourt now attract chatty intellectuals to the many cafés that have surfaced of late. At the corner of Calle Santo Domingo and Ismael Valdés Vergara stands one of the most peculiar projects in the district, the Casa Naranja, a distinctly bright orange villa housing a restaurant and art gallery.

Avenida Jose Miguel de la Barra leads you to the back entrance of the Cerro Santa Lucía, a tiny verdant hill that is arguably Santiago’s most memorable landmark. The Santa Lucía is not so much a conventional public park, as a vertical labyrinth of hanging gardens and ruins of a Spanish fortification. Its origins stretch back to the city’s origins, when Don Pedro de Valdivia reached the valley of Santiago in 1541. Valdivia thought it strategically brilliant to establish a settlement under the shade of this small hill, which the natives referred to as ‘Huelén’, to watch over and fend off the city from angry mobs. In 1872, the Santa Lucía was transformed by city leader Bejamín Vicuña Mackenna into one of the capital’s most romantic locations, adding the narrow paths, staircases and Tivoli-esque water fountains that make up this atypical green space. The many trails merge atop in terraced gardens on the several levels of this park, reaching also several viewpoints from which you can see an astonishing view of the city. The Terraza Caupolicán, the largest of all the terraces, is easily recognisable for the original 17th century artillery that beautifies it. Through a doorway that still displays the symbol of the coat of arms of the King of Spain, you can descend into the main Plaza Neptuno, where a large fountain opens up to the staircase that leads onto the entrance from la Alameda. The water fountains that can be found around the hill form part of a clever network of waterworks that also keeps the plants watered.