Bellavista stuns with its colourful streets, its fanciful architecture and the lushness of a colossal tree-clad hill, the Cerro San Cristóbal, as a natural backdrop. No wonder it was here that Pablo Neruda, Chile’s famous Noble-laureate poet, decided to build his home in the capital in the 1950s. On lazy, sunny days, this barrio feels like a village miles away from the roaring noise of la Alameda – even if it’s only a short walk away.  Yet it’s not Bellavista’s daytime cuteness that pulls the punters. The area’s numerous snazzy bars, restaurants and cafés heave with crowds every weekend night as the barrio reaches fever pitch. This hotly desired location has drawn a massive investment in nightlife infrastructure and these days the Bellavista can, quite literally, cater for all tastes. 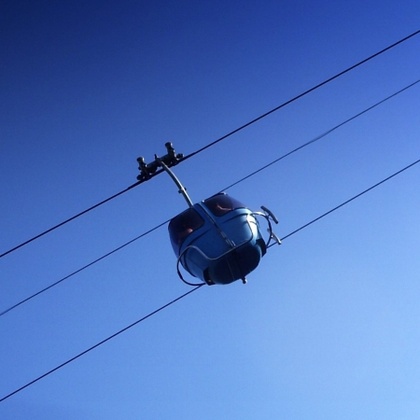 Greetings, earthlings! Out of this world views from Cerro San Cristóbal

But the area’s accelerated rise in popularity has not been without its critics. The cult status that the barrio enjoyed during the 70s and 80s was ditched long ago, and its increasingly mainstream orientation has made bohemian Santiaguinos revile the changes. There is definitely some truth in that you’re more likely to encounter tourist traps here than anywhere else in the capital, but that needn’t imply that you should give this place a miss. Like anyone of a certain age, Bellavista knows how to outsmart the new kids on the block and the gastro ventures that have recently sprung up have more than made up for the loss of its former scruffy seductiveness. Far from suffering from a midlife crisis, the Bellavista has managed to retain its supremacy as Santiago’s top destination for night entertainment.

Kick off your tour of the area across the Puente del Arzobispo (Metro Salvador) at the Montecarmelo, a former cloister of the Carmelite Order recently redeveloped into a multi-purpose cultural venue. Follow on busy Avenida Bellavista and take a moment to browse through some of its excellent bijouterie shops. Here you’ll find the city’s finest retailers of Lapislazuli, a semi-precious opaque stone with a distinctive bright blue colour that is a trademark of Chilean crafts industry. Lapislazuli can be found in Northern Chile, Southern Peru and Afghanistan, but artisans here assert vehemently that the local stone is purer and bluer than the Asian counterpart. The stone is crafted into all sorts of figurines, with outputs ranging from kitschy décor to more exquisite creations. Bargains are thin on the ground, but try your luck outside busy shopping hours (Friday and Saturday afternoons) when you may get a deal if trading is slow.

‘Bellavista knows how to outsmart the new kids on the block. The gastro ventures that have recently sprung up have more than made up for the loss of its former scruffy seductiveness’

Escape the traffic of Avenida Bellavista by heading in direction of the San Cristobal through the verdant streets of Barrio Bellavista proper.  You’ll stumble across Calle Dardignac, quite the trendiest of all the thoroughfares in the area, with dozens of legendary restaurants and bars standing side by side. Places like Azul Profundo, Kilomètre 11.680 and the Cava de Dardignac are renowned for having pioneered the ‘tabla’ – a local version of smorgasbord that makes ideal nibbling while sipping on a good red. There are also some excellent hangouts along Calle Antonia López de Bello, like ‘Off the Record’, a desperately inauthentic but ultimately charming bar cluttered with kitsch and 1930s memorabilia.  Between Calle Constitución and Pio Nono is the increasingly popular Patio Bellavista, a enclosed, modern redevelopment unveiled in recent years. It boasts a number of bars and restaurants, as well as a selection of shops selling the sort of items visitors love to take home. There is also a decent wine merchant, an art gallery for the moneyed and as a bonus point, it stays open for much of the night. 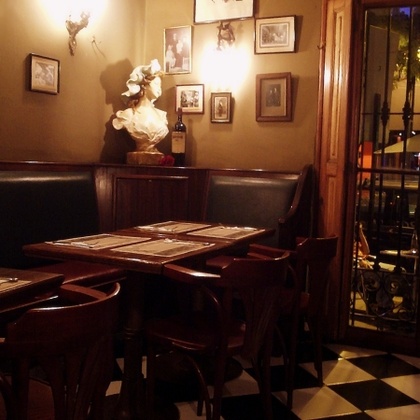 Good, old fashion fun at the Off the Record Café, Barrio Bellavista

Back towards the Cerro San Cristóbal along Calle Constitución and you’ll come across the tranquil Plazoleta Mori, with an architecturally hybrid red house lurking over it. Only a few steps away is Bellavista’s prime attraction, La Chascona, a house once belonging to the poet Pablo Neruda. As many of the artists of his generation, Neruda perfectly fitted the stereotype of the bohemian literati; he enjoyed travelling, collecting items and hosting memorable parties in his residences, each decorated to a distinct theme. La Chascona is his only house in Santiago (the other two are in Chile’s central coast), and its name “woman with the scruffy hair” was inspired by the hairdo of Neruda’s first wife, Matilde Urrutia, who used to dwell at this address. La Chascona is in a privileged location, it feels almost cottage-like with the lush hill as a backyard and the tranquil streets around it. But la Chascona was never to be Neruda’s favourite residence – his heart and soul were by the sea. Still, the remainders of his unrelenting love for the ocean are evident everywhere, from the ship-like windows to the boat-shaped mansard. La Chascona is a not only a museum of one of the world’s best loved poets, it is also an icon of interior design. Sadly, many of the poet’s collected objects that once decorated this house were lost to looting in 1973. Being a member of the Communist Party, Neruda’s residences were an indiscriminate target during the first few days of Pinochet’s coup d’etat and la Chascona was perhaps the worst victim of all of his houses. Soon after democracy made a comeback, the Fundación Neruda, a charity, sought to give la Chascona a thorough makeover. The museum became an immediate success, particularly with foreign visitors, including celebrities and politicians. Authorities also decided to improve the street area and transformed one end of Calle Fernando Márquez de La Plata into a small amphitheatre where small crowds gather on weekends to read poetry or watch street performances. The new life with which the house has been injected has probably restored much of the sentimental value that the poet once attached to his personalised homes.

Calle Pio Nono is a divisory line between the modern, upscale Bellavista and a more raggedy area to the west. Calle Pio Nono was an iconic setting in the Santiago of the 1980s, when crowds used to flock to an improvised flea market on its sidewalks. Sadly, the street earned some reputation for petty crime and drug dealing, although things have improved considerably over recent years. At the north end of Pio Non, Plaza Caupolicán, doubles as a playground for families with children on weekends and is the gateway to San Cristobal’s Parque Metropolitano. This huge park was brought to life by Benjamin Vicuna Mackenna in the 1870s, who began planting of a variety of tree species like eucalyptus and pine trees. The development gained impetus in 1918, under the direction of Alberto Mackenna, who built terraces, pedestrian pathways as well as roads for car use. A funicular was also commissioned to connect Plaza Caupolicán with Terraza Bellavista, including a midway stop for the Park’s somewhat lacklustre Zoo (Parque Zoológico de Santiago). An alternative entrance to the San Cristóbal is through the north end of Pedro de Valdivia (Metro Station Pedro de Valdivia) although both ways meet at the various terraces above. Tha park boasts restaurants, playgrounds and two large public swimming pools. An easy, yet vertigo-inducing way of reaching the summit is by using one of the egg-shaped cable cars or teleféricos. The adrenalin-stimulating ride (note however, that the teleféricos’ safety record is unspoilt) commands unsurpassed views over the valley. The summit is crowned with the gigantic statue of the Virgin Mary overlooking the sprawling urban area.