Elegant but far from snooty, the Barrio Brasil delivers culture, good food and nightlife by the truckloads.

It all started in the early 1990s when a number of rock bands and eccentric artists moved in to vacant buildings in the vicinity of Avenida Brasil, west of central Santiago, in search of creative inspiration and neighbours with high tolerance to noise and nuisance. It wasn’t all too difficult; the place was dotted with unglamorous car servicing garages, making any kind of cultural regeneration be welcomed with open arms. This once well-heeled district had been in decline since the 1950s, a destiny that was sealed after the area was severed from the centro histórico by the construction of the appalling Norte-Sur highway. Such was the state of its isolation, than the Barrio Brasil managed to escape some of the hideous architectural rationalism that assaulted the city in the decades to come. Indeed, the timeless scenery of this most picturesque of neighbourhoods has prompted authorities to declare it a conservation area in an effort to boost its development as a cultural hotbed. 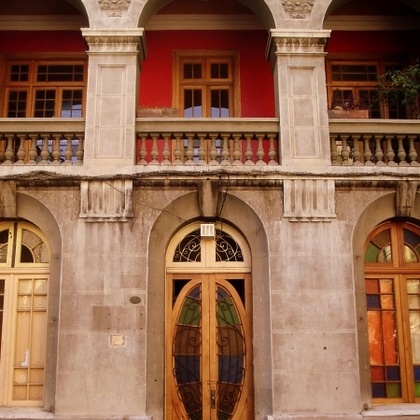 The colour palette of Barrio Brasil

The Barrio Brasil remains quaint and romantic in its cobbled streets and seigniorial mansions, but its double life of gossipy barrio and hippie conglomerate have rendered it irresistibly cool. This is an inviting neighbourhood of wide open windows, where the buzzing of family lunches and punk-rock sound-test blend in perfectly. No wonder it has become de rigueur for locals and visitors alike. A great number of bars, designer restaurants and boutique hotels have surfaced in recent years without altering the ambiance of hip that is so innate to this beautiful area.

‘The Barrio Brasil narrates a tale of wealth and refinement in every corner that retains a slice of its opulent past.’

To get the most out of this barrio one must really just wonder along its streets and explore. For a good walk around the area, kick off at Republica Metro Station and head up Calle Concha y Toro, where you’ll reach a plazoleta of cinematographic prettiness. The mansions encircling it once belonged to a selection of upper-class families, including the Concha y Toro family (now famous for their wineries). New tenants have come up with exciting redevelopment projects, such as the Zully bar & restaurant at number 34, now a leading attraction for its elaborate cocktails and stylishly decorated lounges.
East of Avenida Brasil you will find a great deal of fine buildings with quite eclectic architectural styles; from the gothic Basílica del Salvador on Calle Almirante Barroso to the Art-Nouveau maisonettes of Calle Cienfuegos. North up the tree-lined Avenida Brasil, you’ll come across the Plaza Brasil, the epicentre of the neighbourhood’s 24-hour buzz. During the day, children play hide-and-seek among the colourful sculptures by Federica Matta, daughter of the renowned Chilean painter Roberto Matta; while night-time sees the plaza morph into a youngsters’ meeting point before the party moves on to one the many nearby clubs and bars. 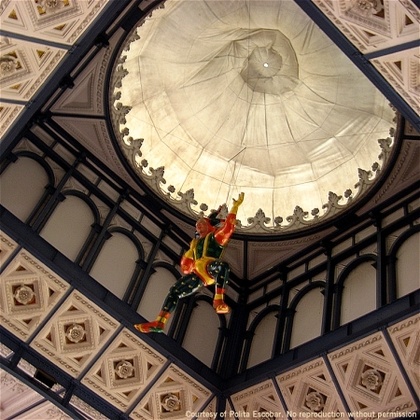 Hangin’ out in the Artequin interactive museum for children, Quinta Normal

The square stands amid some fin-de- palaces and the sight of the Iglesia de la Preciosa Sangre with its red-coloured bell towers. During early 20th century, this church and convent were known for accommodating pregnant aristocratic bachelorettes. Such was the fate of Teresa Wilms, one of the Santiago’s most prominent socialites at the time: forced into seclusion by her family in 1915, she staged a escape with Vicente Huidobro, a celebrated poet of the time.
The Barrio Brasil tells a story of wealth in every corner retaining a slice of its opulent past. One of those corners, on Compañía and Calle Libertad, is where the Peluquería Francesa (the local ‘french’ hairdresser’s) used to operate. Now a project blending the concepts of restaurant, bar and antique shop, the ‘Boulevard Lavaud‘ offers a tapas-style menu as well as the opportunity of buying some of the unique antiques decorating it. This side of the barriodraws closer to Plaza Yungay, perhaps one of the most untouched neighbourhoods in central Santiago. Here you’ll discover some beautiful cités, like that of Calles Adriana Cousiño, Lucrecia Valdés and Hurtado Rodríguez. On the west fringes of the district lies one of the capital’s newest cultural regeneration projects, the Biblioteca de Santiago on Avenida Matucana. Inaugurated in 2004, this library is aimed at a non-academic audience and is today a lively public space. The brilliantly redeveloped building (formerly a government storage) holds exhibitions, workshops and all sorts of activities for adults and children.

Over Avenida Matucana lies the Quinta Normal, Santiago’s oldest public park. The ‘Quinta’ started off in 1830 as the Botanic Gardens or Jardines de Aclimatación and was for years the capital’s only public gardens. Its original purpose was to promote research in botanic sciences and that is why museums such as the Museo de Historia Natural were built inside, though regrettably at the expense of quality open spaces. In fact the Quinta Normal just doesn’t feel green enough and it’s somewhat dissapointing that not much has been done to make it an inviting place to unwind in the surrounding nature.

Just outside the northern entrance to the park lies a rather impressive Art deco structure, the Basilica de la Virgen de Lourdes – one of the capital’s most remarkable churches. Packed on Sundays and not significantly quieter during weekdays, the so-called santuario is an emotive cameo of the city’s religious life. At the right opposite end of the park stands what once was the Chilean pavilion at the Paris World Exposition of 1889. This remarkable structure, made of wrought iron and glass, was converted into Santiago’s interactive children museum, the Artequín, housing a screen-touching and button-pushing display of educational games for the appeal of curious kids and families. Back to Avenida Matucana and heading south towards the Alameda you’ll come across the capital’s newest cultural asset, the Centro Cultural Matucana 100, an increasingly popular since art space since its inception in 2001. The M100 offers theatre and dance productions, gigs and various exhibitions by local and foreign artists. You shouldn’t finish a tour of the area without visiting the Estación Central, Santiago’s main Railway Station, and its impressive Art Nouveau roof built in 1897 by the French company Schneider Cie. (of which Gustave Eiffel was an head designer). After the disappearance of the Northern Railway terminal at Estación Mapocho this station has absorbed all of Santiago’s rail services.