The most attractive thing in Santiago’s Centro histórico is the total absence of subtleties. Soaring office towers, bustling cafés and thousands of city workers make up most of the scenery in what is in fact, a stately and formal city centre that was built to impose, not to please. On the face of it, Santiago looks akin to any self-important commercial hub, and indeed it would be one, weren’t it for its uniquely flamboyant and decadent spirit that makes it so captivating. 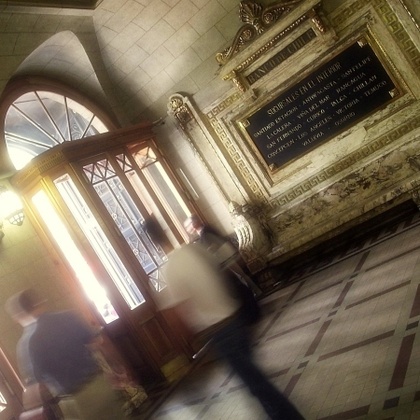 It’s hard to escape this area’s enticement: as you nip into its seemingly endless galerías selling everything from self-help books to sex toys, or intoxicate in its time-worn bars or fuentes de soda, where football fans argue to the rhythm of boleros, you’ll find it difficult not to like Santiago’s historic quarter. How not to be amazed at its elegant 19th century palaces, its beautiful and intriguing churches, or its emotive historic sites where Chileans find the meaning of their nationhood? At first it’s easy to think that nobody makes a trip downtown without a goal in mind, be it a business deal to make, a present to buy or a candle to light up. But you’ll soon discover that this is far from a purely functional place; Santiago’s centro has the fascinating capacity of offering each and every one of its visitors an irresistible, mundane pleasure.

Unquestionably, it is the diehard habitués that make old Santiago truly unique, whether witnessing the brass band recitals in Plaza de la Constitución, playing chess among friends at the Plaza de Armas or downing espressos served by skimpily dressed ladies at one of the inimitable Cafés con piernas. The protagonists of the centro’s daily pulse will never tire of adding character to this compact historic quarter which for centuries has represented the very best that the city can offer. Yet the centro histórico has lived through some tough times too and has faced an uphill struggle to retain its pre-eminence in a city that has expanded explosively in the 20th century. The large urban area that surrounds the old city boundaries has spawned several commercial and financial centres of its own, making the once indispensable heart of the city no longer the concentration of the capital’s trading industry nor Santiaguinos’ primary place of work. Fortunately, however, the decrease in human influx has provided the opportunity of a well-deserved makeover. Key landmarks such as the Cathedral have been restored, streets have been pedestrianised and public safety has improved. A rigorous conservation of the centre’s architectural heritage has also led to initiatives to grant better access to landmark monuments to the general public, with symbolic events such as the opening of the gates of La Moneda or the introduction of a ‘national monuments day’ every last Sunday of May. But even if you don’t get to visit all of the area’s historic sites, chances are that even the most whimsical of sightseeing trails will impregnate you with the centro’s timeless atmosphere. 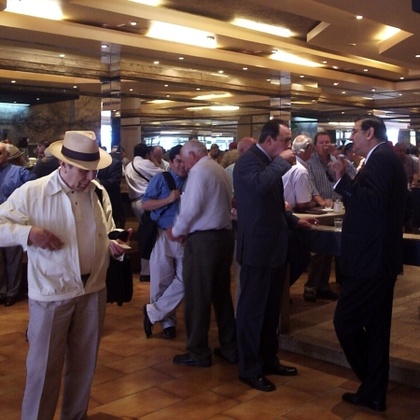 A man thing: breaking for coffee at a Café con piernas

The straightforward layout of the centro’s streets will give your walking tour a degree of effortlessness and flexibility. For simplicity’s sake, this guide will use La Moneda and the four main churches as point of references of proposed walks which will provide you with a fairly thorough view of the area. Depending on your pace and willingness, you could feasibly accomplish an all round tour in under a day, although you shouldn’t make this your goal. Give the centre a generous amount of your time and patience and you’ll make the most of what it has to offer.