In the era of mass media, Santiaguinos do not easily buy into the local theatre and live music scene. Performing arts in Santiago have remained essentially old-school, with a tradition of theatre, music and dance that is of good quality, but not exactly prone to innovation. To be fair, creative new talents have often found it difficult to take off in an environment that is excessively elitist. Bright young artists often complain that the very scarce government funding goes nearly always to the same-old-same-old and that their efforts to ‘break through’ are not perceptibly supported. In this context, unless something appears truly extraordinary, local viewers will frequently assume that when it comes down to the homegrown artistic productions, they’ve seen it all before – and they’d often be right.

An audience with high expectations has forced the capital’s performing arts scene to rethink itself.

It’s not surprising then that a performing arts scene that has long neglected new talents is not keeping up with an audience that no longer settles for tested formulas. In a city where international acts are fast becoming common sight and the annual calendar of world-class events is not far behind from that of the so-called capitals of culture, Santiaguinos have become an increasingly demanding lot. Thankfully, however, alarms have started to ring, and clear signs of revolution are cropping up with encouraging pace. Although experiencing a memorable play, concert or dance performance in Santiago remains largely down to imported artists, you stand an increasingly greater chance of witnessing some truly worthwile performances in Santiago’s domestic theatre and music scene.

Theatre is the one industry that stands out in Santiago; a city which is unquestionably one of the flourishing capitals of the continent’s dramaturgy. Be assured: you won’t find Andrew Lloyd Weber franchises or naff Showgirl stuff here, Santiago’s theatre scene takes itself very seriously. It’s been heavily influenced by the French school and it’s of a peculiar genre – once you scan through the listings, you’ll immediately know whether this or not is your cup of tea. For the most intellectually demanding productions, concentration, emotional endurance and an excellent grasp of Spanish are absolutely essential. Still, the capital regularly offers a selection of more effortless entertainment and you needn’t necessarily be confined to a conventional playhouse to get a taste of the new trends of modern Chilean theatre. A quiet revolution is pushing theatre outdoors. 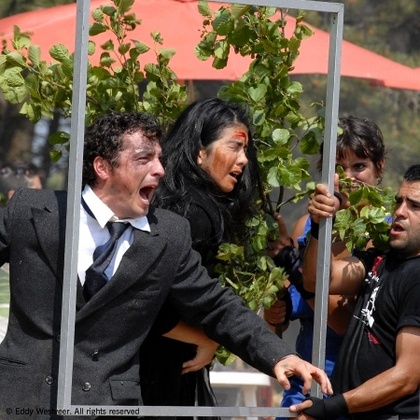 Every summer, a major annual event, the Festival Internacional Santiago a Mil, takes over a city that becomes eerily deserted after the massive exodus of the population to the seaside resorts, bringing theatrical life to anything from purpose-built venues to cafés, cultural institutes and most significantly, to the streets themselves. In fact, the festival’s emphasis on street theatre adds to a ubiquitous and contagiously buzzing atmosphere in the capital, while its ever-more abundant and varied programme makes it an absolute must if you happen to be around in the early Summer months. In recent editions, the festival’s international guests have been of escalating quality: the Pina Bausch, Jan Fabre and John Jasperse Theatre Companies have all taken part together with a prominent new breed of fresh Chilean talents such as Compañía Gran Reyneta under the direction of France’s Jean Luc Courcoult.

It is not far-reaching to suggest that being the country’s economic and cultural centre, all notable Chilean musicians have had some sort of dealings with the capital’s music industry. The most pretigious concert halls, the largest venues and the best equipped recording studios make this city an attractive destination for both established and amateur musicians nationwide.

But a thriving music scene has been partially obscured by recent turbulent events right at the heart of the capital’s Classical Music machinery. In mid-2006, only months away from its 150th Anniversary, Santiago’s Teatro Municipal, the city’s opera house, filed for bankruptcy amid critically low levels of income and funding by the local authority. For the first time in decades, el Municipal had to cancel an entire season whilst it made some earth-shattering restructuring. Among the new measures introduced was the decision to contract-out musicians, leaving the entire Santiago Philharmonic Orchestra jobless.